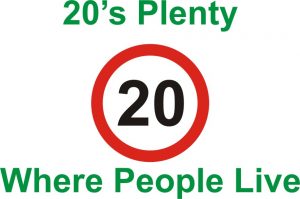 More on our joint election campaign with Darlington Friends of the Earth for a blanket 20mph speed limit in the town’s residential streets. New research entitled “Health on the Move 2” evidences why 20 mph limits in residential areas are key to improving the health impacts of local transport.

“The difference between travelling two miles at 20mph and travelling it at 30mph is only two minutes.  Those who oppose this measure are saying that two minutes off journey times is more important than children’s lives.”

Large parts of the street system should be closed to through motor traffic (with a 20mph speed limits on vehicles using them for access) and developed primarily for walking, cycling and community interaction, according to a group of health and transport professionals in a book welcomed by the former Chief Medical Officer of England, Sir Liam Donaldson.

Traffic in streets reduces social interaction leading to people having fewer friends and less commitment to their community. As social support networks have been shown to increase life expectancy the group contends that creating “living streets” will increase community cohesion and improve health, as well as creating new cycle routes.

Health is impacted by transport in positive and negative ways.  Moving around is a way to access to goods, services, jobs and amenities.  Walking and cycling offer excellent ways to build activity into everyday life.  But transport also causes injuries, stress, disruption of communities, noise and air pollution, and emissions.   Transport’s effects exacerbate inequalities, with gains from motorised transport accruing particularly to the better off, while the adverse effects fall disproportionately on the disadvantaged.

The connections between transport policy and other policy areas such as health and economic inequalities are often ignored by local politicians, who tend to deal with such issues in a highly compartmentalised way. But candidates for the coming election would do well to compare the conclusions in this book with the aims of our council’s core strategy for the next 10 years, One Darlington, Perfectly Placed. If they are serious about narrowing the gaps in life  chances, nurturing a strong, vibrant and cohesive borough-wide community, tackling the gaps in health and well-being across the borough,  and doing all that we can locally to reduce our contribution to global CO2 emissions (all verbatim quotes from that document), 20mph for residential streets is a crucial component in the solution mix.