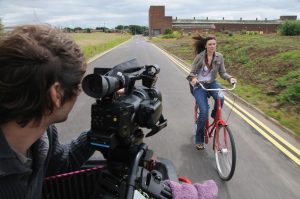 At last, our next production is off the ground! After two years of touring with our film, we are back in Darlington to start the pre-production phase of the official follow-up to Beauty and the Bike. We start with a casting session for our short drama on Saturday 14th February. Here is our press release:

Local film production cooperative Darlington Media Group are seeking local acting talent to star in the follow-up production to their widely-acclaimed documentary Beauty and the Bike. The production team will be filming a short drama for the big-screen later this year, but are now seeking out 3 local women and one local man for the lead roles with a casting session on Saturday 14th April, starting at 2pm, at their media workshop base at Darlington Arts Centre.

Beauty and the Bike, filmed largely in Darlington in 2009, has been screened in towns and cities across the world, from Vancouver to Prague to Melbourne, as well as extensively throughout the UK. It won the public prize for best film at last year’s Bicycle Film Festival in Germany, and is still getting tens of thousands of hits on YouTube. Darlington Media Group’s new film will dramatize some of the many stories to emerge from the experience of women trying out cycling in their everyday lives. Producer Beatrix Wupperman explained:

“We need to cast for the film now, as we want to have 4 confident cyclists by the time we start production. Some of the scenes will involve dialogue whilst riding a bicycle, and they will need to have plenty of time to practice. With this in mind, we are going to give the 4 actors a dutch bike each to use regularly between now and our shoot”.

The storyline for the new film is still under wraps, but will involve a lead role based on the dual personalities of a famous cycling twitterer from the town.

Anyone between 24 and 40 years old interested in taking part in the casting should contact the producers by email, at dmg@bikebeauty.org, or by telephone on 07967 972092.

One thought on “At Last – Beauty and the Bike 2 Underway”