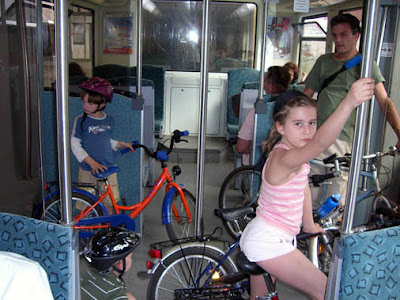 Fiona Hall, Lib Dem MEP (Member of the European Parliament) for the North East, is visiting Darlington this Saturday, April 28th, as part of her campaign to make trains more accessible for cyclists and wheelchair users. Darlington Cycling Campaign are supporting the campaign and will be meeting her at the station.

The European Parliament voted for a resolution to require trains to have extra space for bikes, pushchairs, wheelchairs and sports equipment. This is going to the Council of Ministers and the UK Government have said that they will fight against the proposals in the transport ministers’ meeting. The story so far is on Fiona’s website:

Campaign members use the train on a daily basis, using bikes at either end of the journey:

I find my journey to York quite easy by bike and train and it is a lot quicker than driving. I think there is potential for a lot more cycle/train commuters in Darlington.

I use the train quite regularly for work and it often makes sense to take my bike. I have done this on several occassions from Darlington to Newcastle,
Durham, York and Middlesbrough.

So, bikes and trains can live happily together. Or, can they?

Booking a bike on a train is very difficult and time consuming, so I have a bike at both ends (bike 2 lives on York Station).

The main problem that I face is the insistence that I make a reservation for my bike. This is a problem because, if I’m attending meetings, I don’t necessarily know what time they will finish. I have missed trains where I’ve made a reservation or faced a long wait for my train if the meeting finished early.

More space on trains is clearly needed, both for bikes and wheelchairs/scooters.

(we regularly use the train with our kids and it only takes a couple of families doing the same and the lobbies are stuffed full of pushchairs.)

Cleverchimp raises the question “What did your streets look like before cars, or do you live in a place designed for cars and people who don’t question their need or their demands?“

Are we seeing the beginning of more car-free areas in Darlington with the introduction of the Pedestrian Heart?

Looking for a way to transport the whole family? The Cleverchimp blog features two videos; one showing four people on one bike (a Bakfiets – mam, dad, and two kids), the second of thirteen people on seven bikes.

From today, Julie, 43, and Alasdair Ross, 44, from Darlington, and their two children are to rely on bicycles for transport. Mrs Ross said the challenge was laid down at her Weight Watchers class after she reached her target weight.

To help Mr and Mrs Ross and Stephanie, 14, and Hannah, 11, with the task, Halfords have given each of them a bike.

Mrs Ross said: “The hardest bit is going to be for my husband, who has to travel quite far to see clients for his business. He’s allowed to ride a bike to the station and catch a train and then ride it at the other end. I work for the business at home, but I do quite a lot of voluntary work with the Brownies and the church, and travel to that. It’s not totally feasible that we can carry on without the cars afterwards, but, hopefully, we’ll get quite fit and cut down how much we use them in future.”

Halfords also gave the family a collection of accessories to assist in carrying out their day-to-day chores, including cycle locks, a selection of panniers and backpacks, reflective waistcoats and baskets.

Northern Echo: Getting on their bikes for carbon challenge

Good luck to the Ross family.

My own family gave up our car 9 days ago and we’ve not missed it so far. We hardly used our car, and resented spending money on car tax, insurance, servicing, MOT, etc, so we sold it. We’re viewing it as a one year experiment, initially, but we’ll see how it goes.

We’re using internet shopping for our groceries, buy meat from a local butcher and have just signed up for an organic veg box delivery.

Our two kids are a lot younger than the Ross’, so we’ve bought a bike trailer. Buses, trains, bikes and walking get us about. We’ve booked a hire car for our main summer holiday.

If the Ross family would like any advice or support, I would be happy to offer it. If anyone knows them, can you pass on this blog address?

Update: I just realised that we’ve not been given free bikes by Halfords! How does that work? Can we have some? 😉