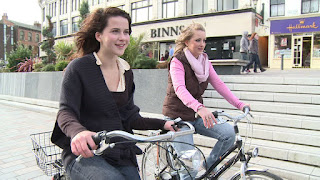 Should these cyclists be banned?

Following nearly 18 months of probation, the council is planning to make a decision about whether to allow cycling in the pedestrian heart to become a permanent feature of the town, or ban cyclists in some way from our town centre. This is a crucial issue for the future of cycling in the town. The Pedestrian Heart is the only safe way across the town centre for cyclists.

Government guidelines state clearly:
‘For any new pedestrianisation scheme, there should be a presumption that cycling will be allowed unless an assessment of the overall risks dictates otherwise. In conducting this assessment, the risk to cyclists using alternative on-road routes should be taken into account’.

The Campaign conducted a CCTV study of cyclists in the Pedestrian Heart last year, monitoring Bondgate for three days. We spent some 60 hours analyzing the footage, noting any indication of pedestrian unease, annoyance or change in direction/behaviour due to a cyclist. We found five examples where a pedestrian slightly changed their behaviour – slowed down or changed direction. We found no examples of a risky “close shave” or similar incident.

You can view and download a PDF version of the CCTV study here.

We have concluded that cyclists pose no significant risk to other users in the Pedestrian Heart. Moreover, when the second part of the government recommendations is considered – the risk to cyclists using alternative on-road routes – it is clear that such a conflation of “risk” is made to look ridiculous. Shortly before the Pedestrian Heart opened to cyclists, in March 2007 a cyclist was badly injured on the inner-ring road, breaking a collar bone and missing work for three weeks.

Darlington Cycling Campaign recognizes that, for a minority of users of the Pedestrian Heart, there is a subjective perception of risk from cyclists. As so few people in our culture cycle, it is hardly surprising that they do not understand the attentiveness normally associated with everyday cycling. We have therefore called on the council, police, disability groups and other community groups to engage with us in launching a Code of Conduct for cycling in the Pedestrian Heart. Together, we can ensure that EVERYONE is safe in our town centre. Divided, a climate of fear and mutual suspicion will grow and poison community relations.

If you can make the Talking Together event, please come along and say hello to us on the Cycling Campaign stall. It takes place in the Central Hall of the Dolphin Centre, starting at 4.30pm. The debate starts at 5.30pm.

If you are unable to attend the event, you can make your views known
via the Council message board at
http://www.websitetoolbox.com/mb/darlingtonbc?forum=128606, or by
contacting your Councillor (find out who they are at
http://www.darlington.gov.uk/Democracy/Wards/All+wards.htm).