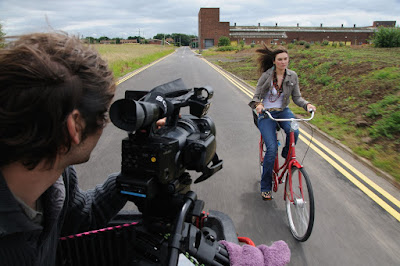 After cinema screenings here in Darlington and in Bremen, Germany, Beauty and the Bike was released on DVD along with the accompanying book in December 2009. The short online film has attracted over 35,000 views in less than three months. Enquiries have been coming in from all over the world. Now cycling advocates are starting to use the film as a starting point for debate about the state of cycling in their own towns and cities.

For example, this local councillor in Vancouver, Canada, has posted the online short on his blog, and there will be a public screening in the city soon.

Screenings in New Zealand, USA, France, Spain and Germany, as well as in various UK cities, are all now taking place or being planned. In most cases, women are taking the initiative and organising these events.

The political challenge implied by the film revolves around how to make cycling more attractive than driving in towns and cities. Here in Darlington, we have ideal conditions to do so. The town is just the right size, and with relatively easy topography, for cycling. If you strip away all the urban planning junk – extra right-turn lanes for little side streets, railings to herd pedestrians like sheep, silly short stretches of parking – that car-centric planners have thrown up these last 30 years, the main arterial roads are generously wide. There would be no problem designing safe, pleasant cycle paths along these key routes.

Then there is the safety issue, one that is known to deter a majority of women from cycling. A useful review of a number of studies that examined the relationship between cyclist safety and infrastructure concluded, not suprisingly, that good quality infrastructure that gave space for cyclists, resulted in far fewer accidents. It doesn’t take a rocket scientist to understand this. Prevent the chance of accidents in the first place by giving cyclists safe space, rather than making such a big issue of cyclist self-protection having just decided to throw him/her into dodgy situations.

Many (mostly male) cyclists go on about “dangers” being exaggerated. Very true. Once you are confident on a bicycle, there’s plenty of “dangers” that can be handled. But this “machoer than thou” approach misses the point. The question needs to be asked, what would most ordinary people prefer? Cycling amongst fast, speeding traffic, or cycling on a separated cycle lane? On such preferences, people choose to cycle (in Copenhagen, Bremen or Amsterdam) or not (in most towns and cities in the UK, including Darlington).

Our good friend David Hembrow, who appears in Beauty and the Bike, has been showing the world what good cycling infrastructure can be like, with excellent posts about his home town of Assen in the Netherlands. He describes this safety issue as “subjective” safety in the following terms:

Subjective safety – Are you near fast moving traffic ? Is it easy to make a turn across traffic ? Do you have to cycle “fast” in order to keep up ?

And you can improve subjective safety by improving the conditions for cyclists. And in response to the macho school he says:

Don’t make the mistake of thinking that subjective safety is a concern only for inexperienced cyclists. No-one suffers from cycling being pleasant.

Interestingly another regular blogger near London, who says he was previously in favour of road-sharing with cars, has now come out in favour of separate cycle lanes. Not least after studying the example of David Hembrow.

Then there is the relative convenience of driving or cycling. In most cycling-friendly towns and cities, a conscious decision is taken to make much of the urban environment people, rather than car, centric. The design of streets tends to relate to the needs of the communities living on them, on the assumption that these streets are shared space, and not private car parks. Town and city centres are typically car free, and around such centres, one-way systems are organised in such a way that driving across town is difficult and complicated. Only delivery services make regular use of such streets. Cyclists are generally not bound by such one-way traffic rules.

Consequently, car drivers learn that these spaces are predominantly for pedestrians, children and cyclists, and unlike the average Darlo motorist tanking down Skinnergate at 5.30pm after the bollards come down on the Pedestrian Heart, they get into the habit of driving with care.

British motorists’ driving habits were one of the shocks for the visiting Bremen girls in Beauty and the Bike. But when you look at the amount of road space car drivers have in this town, it’s almost as if the authorities are begging us to zip through the town. Why this hypocrisy about road safety? Surely if we want drivers to slow down, we should be designing our roads in a way that encourages slow speeds?

Which brings us to the virtuous circle of the busy urban street – take space away from cars to slow them down, and give it to separated cycle paths. The carrot of quality cycling infrastructure. The stick of less space for cars. Where the fuel escalator failed – it changed nothing but the money in peoples’ pockets – this approach to tackling congestion is working elsewhere. Berlin is the most obvious example. Here, the financial crisis has forced the city council to adopt cycling as the answer to congestion, rather than building new, expensive roads.

Are we beginning to see a coalescing of views around building cycling infrastructure where it is needed most – alongside busy urban roads – rather than where it is easy, and doesn’t disturb the car driver? With a Darlington-made film at the centre of such debates around the world, Darlington Borough Council is currently consulting on a Local Transport Plan for the next 15 years. Would this not be an opportune time for such a debate to take place in Darlington itself?

18 thoughts on “Bike Film – Now for the Politics”