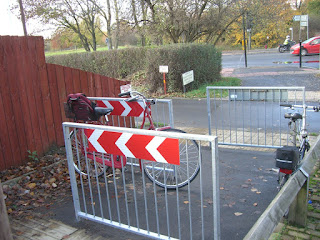 Last year, the otherwise excellent cycle path along McMullen Road was cruelly interrupted by the installation of the above barrier. Just when the Campaign thought that such needless interruptions had become a thing of the past, this appeared. The logic is sadly obvious.

Cyclists approaching this point from the south are riding down a relatively steep incline. Here, they cross a side street into the Red Barns estate. Because of the incline, it has been deemed insufficient for cyclists to have a “give way” sign painted on the cycle path. So a barrier has been installed. Apparently, this followed an accident, though details have so far not been forthcoming.
So why is this junction dangerous? The only reason that there is any danger is the totally obscuring fence that the residents have been allowed to build, and which can easily be modified so that emerging drivers can see the path, but passing pedestrians and cyclists cannot look into the adjacent property.
When we took the above picture we witnessed the result – a young cyclist simply jumped the pavement 20 yards uphill and continued his journey on road, rather than stopping and negotiating the barrier.
This stretch of cycle path was the subject of Campaign consultation when it was first mooted a few years ago. At that time, we urged the council to begin the process of driver education by giving cyclists right of way at this junction. The reason was simple. The side road is in fact a private cul-de-sac servicing a handful of houses. Traffic is so light that even the most dedicated petrolhead could not argue that giving way to cyclists constituted a great inconvenience. And without the obscuring fence, there would be a perfectly clear view between cyclists and any emerging vehicle.
To many, this might indeed seem like little more than an inconvenience to cyclists. But the philosophy behind its construction is deep rooted in the average British traffic planner’s psyche. As the little inconveniences aggregate together into a giant pain in the bum, it is little wonder that the UK continues to be a world loser in the cycle rates league, and a world leader in the crap infrastructure league.
Next week (Thursday 20th January, 6.15pm in the Town Hall), the Campaign will be bringing our views on this little gem to the council’s next Cycle Forum. This is open to anyone with an interest in cycling, so please join us if you can.
« A Sense of Safety
Northern Rail Cycling Forum »