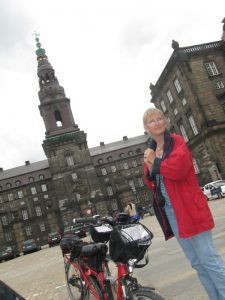 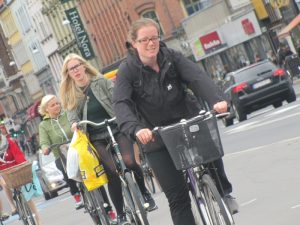 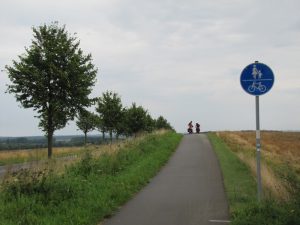 After 3 days of such wide open spaces, it then came as a bit of a shock to arrive in Kühlungsborn.

Ah well. It got us out of the hotel and away from this iPad!

-Posted using BlogPress from my iPad

Well, after all the travelling around Europe with our film, it’s time to have a proper cycling holiday. And what better way to spend a week than cycling through northern Germany and Denmark to Copenhagen.

We’re travelling with two good friends who live in nearby Lillienthal, and will be deliberately restrained about the distances we cover on the bikes. Lazy sods that we are, we’ll happily take a train when time is tight or weather is crap. In fact we decided to get a head start and take a slight detour by train to Schwerin (B) tomorrow, thanks to the cheap tickets available here, and the easy booking of bicycles. Schwerin is the same size as Darlington, so it will be intriguing to compare traffic and cycling provision.

Then to Wismar, (C) and a few days on the Baltic Sea to Rostock (F). A couple of days will be spent as I try to reconnect with some people from the Amber Film I helped make there 25 years ago. Then a ferry to Gedser (G), a bit of pedalling north, and at some point in the same day a train up to Roskilde (I). Between there and Copenhagen we might just do a bit exploring around the north coast. Then it’s back to Bremen on a train (yep, cheap tickets again). So this will be no great feat of sporting achievement a la Olympics, but rather a gentle pootle along proper cycle paths.

We’ll be recording the trip, of course, but what we’ll be interested in is the standard of signposted infrastructure in Germany and Denmark. There’s an ongoing programme of long-distance cycle route building going on here, and standards are generally very good. Even so, there have been cuts in the budget, from 94 million euros in 2010 to 60 million euros this year. Denmark, on the other hand is, outside the well-documented story of Copenhagen, an unknown to us. Some of the official cycle routes we explored on google street view looked distinctly British in nature, ie no cycle path on a busy road. The picture here, for example,  is on one such official route, between Praesto and Faxe.

But there’s nothing like seeing the real thing for yourself, so with iPad in Ortlieb bag we’re off tomorrow!