Why have there been so many reported “near misses” between cyclists and pedestrians in the pedestrian heart? When the Cycling Campaign’s own documented video evidence has found these incidents to be extremely rare?

Perhaps my experience on the way to the railway station this morning is one explanation. As usual I cycled into the town centre from Woodland Road and, on reaching the top of Priestgate, slowed down to walking pace (Bondgate was still relatively empty) to prepare to push my bike down the narrow pavement on the one-way part of that street. Nobody on the pavement, so a short one legged scooter to the first obstruction (a traffic sign) a few metres down and I stopped to get off. An elderly couple were slowly approaching from the other direction. I waited 15 seconds or so for them to approach, did my usual pleasant “good morning” (Code of Conduct rule 3?) to let them pass, and got an immediate earful of complaints.

“Why are you not on the road?” they complained to this stationery cyclist?

“Well, because it is a narrow, one-way street full of buses”, I replied. “Could you show me the cycle path, please?”

“You’re just totally selfish. You shouldn’t be on the pavement. You only think of yourselves”, and off they went, perhaps ready to announce another “near miss”. Certainly it was an unpleasant encounter.

But it also points to the problems inherent in definitions of “pavement cycling”. I scootered the first few metres (one leg on ground, the other on a pedal) simply to reach a point where I could fully dismount. If I had dismounted and pushed before these elderly people passed me, as opposed to stopped, I suspect the space was too narrow (two elderly people, a bike and a dismounted cyclist) for us all to comfortably pass. Better, I thought, to stop altogether behind the obstruction, take up less space, and allow them to pass. Was I breaking the law because I was not fully dismounted?

I have always felt that consideration for others should take precedence over strict legal concepts. Good cycling always involves judgement and interpretation on the road. With so little dedicated cycling space on Darlington’s streets, it is also needed on pavements. And the Home Office agrees.

Last year two members of the Cycling Campaign visited an example of Shared Space in Drachten, Netherlands. You can see our original post and video here.

Since that visit, the Space’s designers have posted an assessment of its impact on YouTube. Here it is. Some highlights stand out, when considering its implications for Darlington:

*It is a roundabout where 22,000 vehicles daily pass by. I wonder how these numbers compare with, say, the Victoia Road/Grange Road roundabout, where a solution for a cycle crossing is yet to be implemented?

*We have no queues anymore. 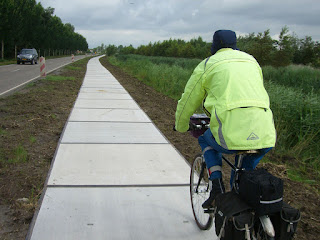