A scheme to build a national network of cycle and walking routes has won a £50m lottery grant by topping a public vote.
The Sustrans: Connect2 project, which will improve travel in 79 communities, beat three other environmental groups with 42% of all ballots cast.

The People’s £50 Million Lottery is the largest ever publicly-decided award.

Last night’s Top Gear featured a race through rush hour London, from the western to eastern ends(?) of the North Circular.

They didn’t go into a lot of detail about the times, but public transport beat the car by 15 minutes.

TWO wheels beat four during the latest “commuter challenge” to find the quickest way to travel into Edinburgh city centre.

The annual time trial to see which is the fastest way to get to work saw bicycles and motorbikes take the honours in four races from the edge of town to Frederick Street.

Motorbikes came out on top in the journeys from Ocean Terminal and the Ingliston Park and Ride. But the cyclists, who were described by event organisers as typical commuters rather than competitive racers, were fastest on the trips from Newcraighall Station and Edinburgh Royal Infirmary.

The slowest journey was in a car from Newcraighall Station, taking 43 minutes to travel the 5.3 miles.

– Bikes roll ahead in commuter challenge

I can ride home from work (west end to Haughton, about 2.5 miles) 8 minutes faster on my bike than it can be driven during rush hour.

So there it is, cycling in the Netherlands and Germany can be just as variable in quality as in any other country – although the standards by which quality gets judged tend to be much higher than those in the UK.

What really puzzles me is this. Is traffic engineering in the 21st century really a science, or is it just a political football? I ask this honestly of the traffic enginners of Darlington, and of the politicians who rule them.

This trip clearly demonstrated that, when planning for cycling (as, we are told, Darlington, Cycling Demonstration Town, is doing) a raft of traffic measures is at the disposal of traffic engineers to consider, whenever a new scheme is developed. These include – all of which have been clearly illustrated on this blog:

*priority to cyclists at crossings with side roads
*cycle rings around roundabouts
*scrapping of centre lines on narrow roads to enable cycle paths to be created
*20mph zones
*shared space projects
*cycle paths that use both road space and pavement space at different times, depending on space availability
*making car driving in urban areas more difficult, to get people out of their cars
*cycle streets
*one way streets for motor vehicles that are two-way for cyclists

I genuinely ask – do these traffic engineering tools ever get considered in a town like Darlington, or are we victims of car-induced brain death in this department? Would it not be useful to at least have a traffic planning process that required engineers and politicians to explain why they have rejected such solutions, rather than never even having to consider them?

What this variation in cycling provision also suggests is that a grading of cycling provision – independent of country – is both appropriate and possible. The cyclist priority roundabout in Ijmuiden would get 5 stars, the cycle paths on country roads in Friesland only 2 or 3.

Similarly, our (current) right to cycle through Darlington’s town centre feels something like a 4 star hotel, with no dangerous vehicles, plenty of space, and only the sudden changes in direction, and ongoing obliviousness, of pedestrians to consider. The ring road, on the other hand, could be classified as the equivalent of a whorehouse, with cyclists the unpaid prostitutes.

Just as houses are now subject to an eco-grading when they are sold (well, at least 4-bedroom houses at the mo), maybe we should introduce the same scheme for roads.

Ah well, back to the joys of the little island. 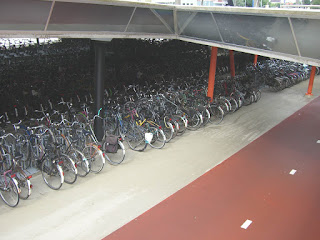 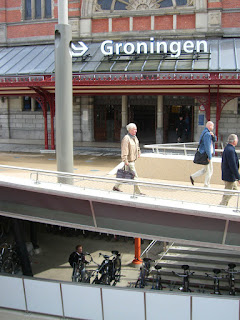