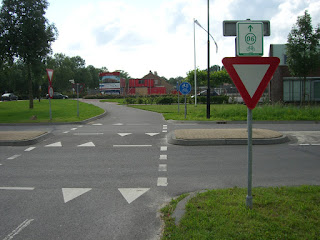 You get your first bike at the age of three. You learn to cycle on Xmas Day with your parents in tow. You cycle to school (illegally) on the pavement.

By 2007 you are at secondary school and some smart powers-that-be have built you a fantastic covered bike shed, so you can still cycle to school (illegally) using the pavements and muddy tracks.

Cycling is such a joy at this age. On Sundays you take your bike out to the nearest park and play cycle jumps all afternoon.

But don’t think too far ahead. One day, if these powers-that-be have their way, they will chase you off the pavement and on to their deadly roads. Cycling in this world is all about defence, helmets and reflective clothing. But it doesn’t HAVE to be that way. There are some cyclists out there who want to carry on with the joy well into their old age. “I hope some day you’ll join us” (JL).

The Northern Echo website carries a story about car drivers parking on and blocking pavements, and the danger this causes, Saving 50p could cost someone’s life.

This, and cars going through amber lights, is one of my current pet hates. We’re back to pushing a single pushchair, but when we had a double buggy our way was frequently blocked by cars with two wheels on the path. I see it as one more example of drivers putting cars before people.

As a bit of an experiment, I used the advised route down Pendleton road this morning, rather than heading straight down North Road. It was quite nice to not be dodging cars, especially now that I’m on a different bike with much wider handlebars.

It did, however, remind me of one of the problems with these routes off the main transport corridor; at some point you have to rejoin the main road. This is my main problem with using back streets and off-road cycle tracks; it’s usually impossible to complete an entire journey on them, so they don’t really encourage people who dislike riding on the main road to start riding their bike and leave their car at home.

Other problems I have with these routes include:

* On my way home, it will be dark. I’d rather be on the well-lit, well-used main road, than in back streets or riding down by the river or on the Black Path.
* Less drivers will see me, which means they will think less about bikes. More bikes on the roads being seen by drivers makes the roads safer for cyclists. If cyclists are tucked away in little hidden sidestreets, back alleys and off-road tracks, they’re not being seen riding their bikes.
* It reinforces the opinion of drivers that bikes shouldn’t be on the road.

Going home, I’ll be back on North Road, I think.